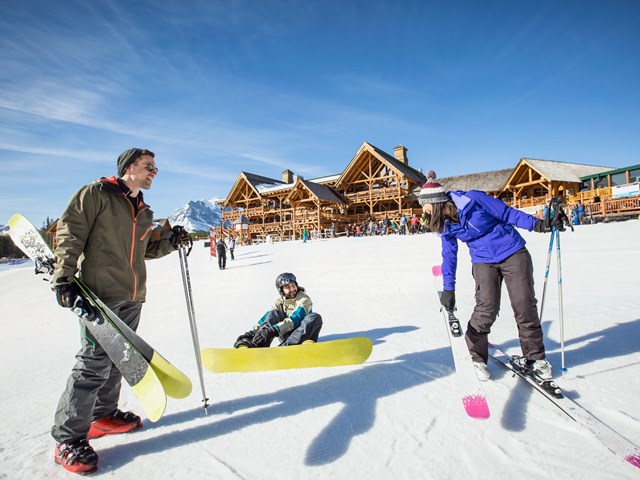 The Rocky Mountain area in Alberta, western Canada, is a goldmine of powdery snow for skiing at all levels. Opening dates are slated for mid-month and it looks like an early start to the season will be welcomed.

This popular resort has just been voted “Gold in the ski/snowboard resort category in the 2007 Calgary Herald Readers’ Choice Awards.” Kicking off the winter season on Saturday November 10, 2007, ski or snowboard at one of North America’s largest resorts. Booking early is the key to deals here, where travellers can save up to 25%, get free lessons, ski free for kids and sleep free for one night at partic. Call 1-800-258-7669 for the latest deals.

With a similar opening date as above, Sunshine Village will open its doors on Thursday November 15, 2007. Usually not closing until late May, the annual snowfall of over 30 feet helps keep the skiers and snowboarders happy. So happy, in fact, that they voted it “Best Winter Activity” in the 2007 Readers’ Choice Awards in the local Banff and Canmorre newspapers. Early bird deals are available for those who book before November 15, otherwise package deals are still available by calling 1-87-SKI-BANFF for all the juicy details.

Getting to Lake Louise Mountain Resort and Sunshine Village, AB

Located 184 km (115 miles) west of Calgary, Alberta, the area is serviced by airlines and buses. The Calgary International Airport is two hours away by car and the Banff Airport is just one hour and 15 minutes away. Bus services run daily from Calgary, Banff hotels, Lake Louise hotels and Edmonton, AB to the ski areas of Lake Louise Resort. Call the reservation department for more detailed instructions at 1-800-258-SNOW (7669).

Also beginning in mid-November, on Friday the 16, this is Marmot Basin’s earliest opening day yet. This is the season when the mountain offers great deals during its “off season.” Expect a laid back atmosphere, small town feel and a vacation for almost all budgets. Season passes are now on sale and give skiers a 50% discount off Jasper room rates during the week and 25% off on weekends, 20% off high performance ski rentals, and discounts at other ski areas. Those under 18 can get one for $599.00 CDN, while adults pay $849.00 CDN. Prices vary for children and seniors and for mid-week days.

Getting to Marmot Basin, AB

Edmonton, Alberta’s airport accommodates international flights from all over the world. An Air Canada flight takes visitors directly from London Heathrow to Edmonton on a daily basis. Daily bus services take passengers from Edmonton, Calgary and Banff to Jasper, and VIA Rail offers train service from Edmonton, AB, Toronto, ON, and Vancouver, BC. Call the mountain at 1-866-952-3816 for more information.