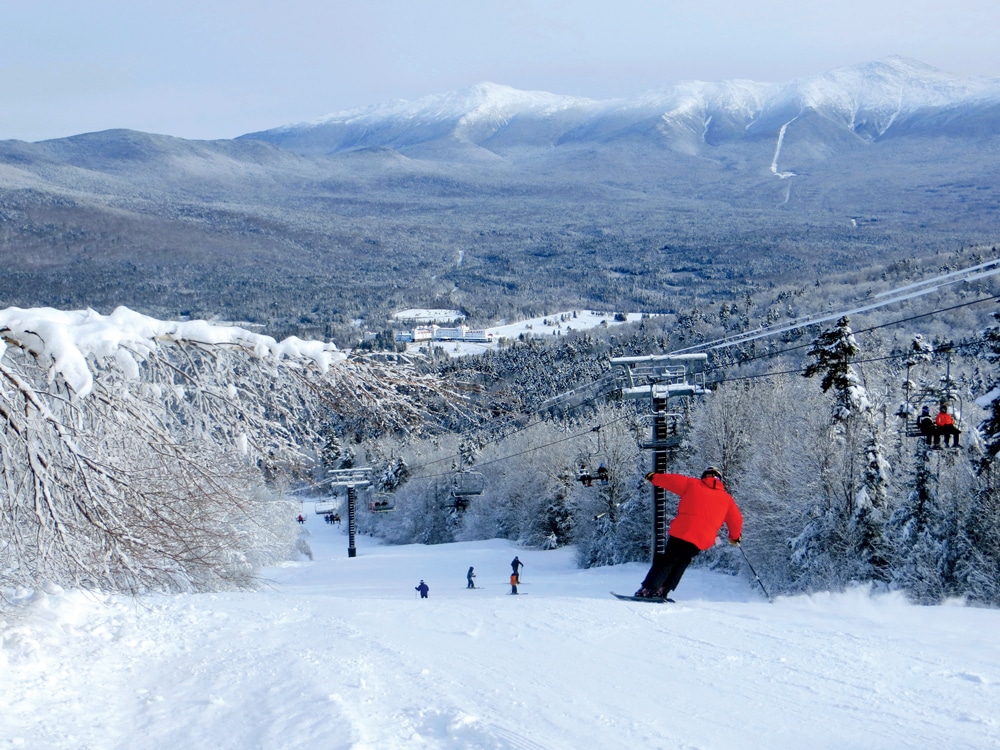 Attitash (Bartlett): Starting 1,400m feet up the mountain, the resort’s new mountain coaster runs on track 2,800 feet long through dips, turns and straight-aways. This attraction will be open year-round.

Black Mountain, Jackson: Black is one of the first ski areas and had possibly the second lift in the U.S. It is known for being family-friendly. Energy-efficient new tower guns have been installed which will increase the efficiency of the snow making system while improving coverage.

Bretton Woods, Bretton Woods: On the west side of Crawford Notch is known as the state’s largest ski area. Associated with the famed Mount Washington Grand Hotel Resort, its trails, slopes and glades range over several mountains. It has an immense variety of trails, slopes and glades. Thirty acres of glades have been added in the Mt. Stickney area and a new free public slalom course with 20-30 gates has been added.

Cranmore Mountain, North Conway: Cranmore has been an industry leader since it opened in the 1930s. It has spent $6 million on improvements this year. Terrain has been expanded in the beginner area and the South Double has been moved there, itself replaced with a Doppelmayr eco-Drive, energy-efficient, fixed-grip quad chairlift. Seventy new tower guns have been installed and the tubing park has been relocated and expanded to ten lanes. The Arlberg Lodge has been renovated as a new children’s center. Cranmore has also added a year-round Mountain Coaster.

Wildcat Mountain, Pinkham Notch: Arguably the most challenging ski hill in the state, Wildcat has made improvements to its base lodge (adding WiFi capacity) and has added two new trails and officially expanded the glades system. It also has spectacular winter views of Mount Washington and the Adamses.

Cannon Mountain, Franconia Notch: Cannon, made famous as the place where Bodi Miller learned to ski, is at the head of Franconia Notch on I-93 providing easy access to top level skiing. This year the first phase of the anticipated re-opening of the old Mittersill Backcountry Area area next door comes true with the installation of a new double chairlift. On the main mountain a needed 9,000 sq. foot addition has been made to the main lodge.

Loon Mountain, Lincoln: In addition to the five new trails on South Peak in 2007, this year Loon adds another 20 acres of tree skiing. North Peak lift capacity has been enhanced by the addition of 35 more seats, increasing capacity 48%. New snowmaking equipment valued at $1.2 million and a new Beast Grooming Cat should also measurably improve skiing conditions.

Waterville Valley, Waterville Valley: Waterville has new owners, the Sununu family, who spent a half million dollars on 25 new snow making guns and a new grooming machine. The base lodge also received upgrades in the form of new bathrooms and food service area.